The last time I tried out some of Dusty Vawter’s amps I was toting two hefty monoblock amplifiers down the Pacific Coast Hwy. On this journey, my payload was significantly lighter. The E-200S stereo amplifier box fit snugly into the back of my Subaru, and once home, this small unassuming amplifier took center stage powering my 2 way speakers- Green Mountain Audio Eos HX.

Getting it out of the box, was a snap (14.0”W x 2.75”H x 10.0”D). The size and weight of this amplifier made setup and handling a breeze. While the front panel grants access to an on/off button with blue LED surround, the host of usual connections can be found on the amp’s business end. Whether you choose RCA or XLR inputs, the custom differential input stage is used. Then an updated UcD Class D stage drives the output. Speaker binding posts are insulated and accept spades or bananas, and a trigger input is also made available. Power cable plugged in, and we are off.

For music, I used a Macbook Pro running iTunes/Pure Music 3. The DAC was my Crane Song Avocet, and the Antelope Audio Zodiac Platinum. With everything connected via balanced cables and several hours of warm up (this amp had already been burned-in) I was ready to start listening to some of my favorite tracks.

I cued up some acoustic music by Kings of Convenience. This Norwegian duo offers a great starting point to evaluate the naturalness of the male voice. Listening to “Rule My World” from “Declaration of Dependence” gave me some lovely acoustic guitars with harmonizing male vocals. 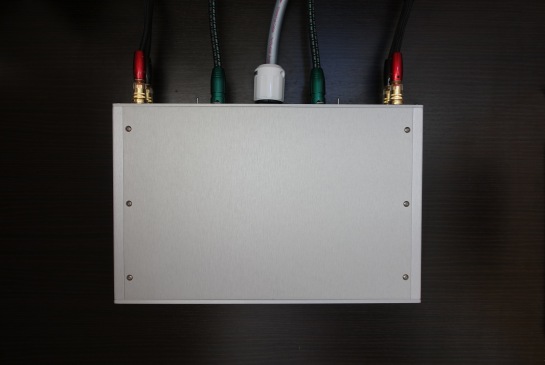 View from above, notice the small footprint

The two part acoustic picking of “Declaration of Dependence” maintained all the midrange richness while allowing the male vocals to almost float above the gentle picking style. The clarity of guitars and male voices were presented in an un-hyped and natural way.

Moving onto more complex works, I began listening to Herbie Hancock’s “Steppin’ in It.” This groove laden funk from Mr. Hancock’s “Man-Child” album features rich synth leads, a tight bass lines from Paul Jackson, and a stellar harmonica solo by Stevie Wonder. Allowing all that musical articulation to shine through requires some control over loudspeaker movement. The E200-S gripped My Eos HX and allowed each and every bass note to come through with precision and depth. While everyone in the band holds down the groove, Herbie takes the Rhodes for a stroll… and before you know it Stevie Wonder is syncopating a harmonica unlike I’ve ever heard. With each breath, a new note even funkier than the last is pumped out. All these counter rhythms and complex instruments can be demanding on an audio amplifier, and the CI Audio E-200S never slowed down. In fact, the intricate stereo soundstage was expansive. To top it off, the tonality of instruments (even the squeaky high harmonica) never sounded dull or harsh.

To verify the neutrality, I relied on several orchestral and vocal ensemble recordings I made for NPR, all at the same performance hall. While less capable amplifiers have shown some distortions or break-up, I’m happy to report that the CI Audio amp had none of those shortcomings. Localizing mic placement, hall width/depth, and reverb decay were all amplified without coloration. This provided a sonic portal to the original recorded events, an immersive experience indeed.

Spending time with the E-200S was revealing in so many ways. From black quiet backgrounds to fully erupting orchestral performances, this little beast was in control. Most of all, this CI Audio amplifier proves that green design and audiophile sound need not be mutually exclusive.