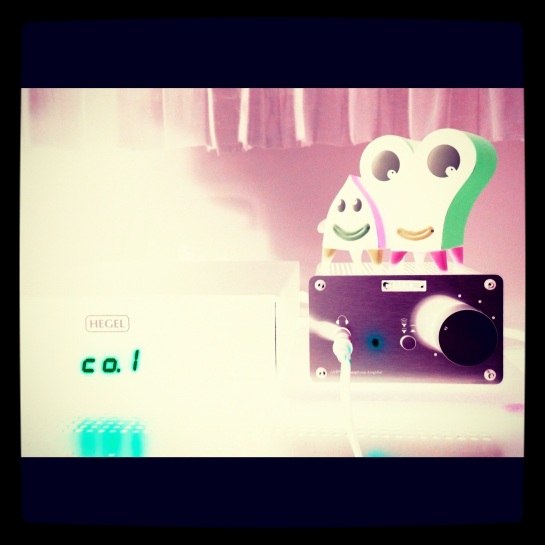 The Hegel HD20 DAC meets the CI Audio VHP•2 headphone amp. Listening to Bill Frisell’s My Buffalo Girl on a Macbook pro running iTunes/Pure Music with 64 bit math and power-of -two (88.2 Khz) upsampling. The CI Audio Transient MK II is providing the asynchronous USB-to-S/PDIF conversion, and the Hegel HD20 is doing the Digital-to-analog converting. The headphones in use are the classic Sennheiser HD-600 open ear cans. Stereo guitars, big bottom double bass, and the lovely B-3 organ carry you away – off to dream land… 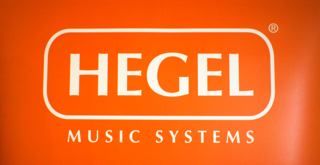 On my last day at T.H.E. Show Newport I walked toward the light.  Literally, the only audio exhibitor who had the beautiful California sun filling the room was Hegel Music Systems of Norway. Hegel electronics paired with Amphion speakers produced a clean modern aesthetic that made me feel welcome. I soon learned that the technology behind Hegel amplifiers was truly unique.

Eileen of Hegel really took her time to demonstrate and explain the technologies contained within their product line. The demonstration focused around using a Hegel CD player, 2 different DACs (digital-to-analog converters), and the H70 integrated amp to power the Amphion speakers. The idea was for a listener to become familiar with a CD music track (converted by the CD player’s onboard DAC) then hear the same track converted through the two different outboard DACs made by Hegel (the HD11 and the HD20). The sonic benefits in jitter reduction and power supply design were readily noticeable. Well Done.

The amplifier technology from Hegel was impressive in that it is able to maintain a high damping factor *(greater than 1000) while using a class A/B design. I was told that by eliminating feedback loops associated with other amp designs, the Hegel amps are able to have less distortion. They use what they call a “feed forward” design. I can certainly attest that this little H70 integrated amp (70 watts a channel into 8ohms) was truly a beast! I can imagine that speakers with decent sensitivity will love the H70’s control and articulation. Most importantly though was the fact that the Hegel amplification seemed to get out-of-the-way. It amplified music effortlessly and seemed to sonically disapear. The H70 also provides analog rca inputs and even a balanced pair of inputs. Hegel even gets you set up to receive digital inputs like coaxial/spdif, optical, and even a USB input for computer audio.

While I have not had a chance to fully review these amps with speaker I am familiar with, I have a good sense of the sonic picture since the Amphion speakers were used  – A Finnish company that has ties to Genelec from the professional speaker world.

Below please find some pictures of the Hegel designs:

Here is a video about the Hegel design.